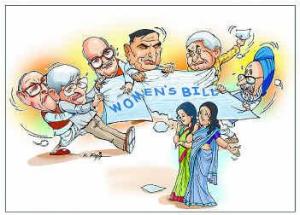 I have been commenting on various blogs for the past few days steadfastly opposing the bill to reserve one third of parliament seats for the fairer sex. I guess I was taking a sledgeghammer approach to a subject that does require some fine observation. So, here is my nuanced opinion. As such, I oppose reservation of any kind, and it annoys me to no end that people can get to certain positions through shunt-pathways that others simply have no access to. Also, I do believe that corruption in politics is widespread, and highly profitable. It doesn’t matter whether the perpetrator is a man or a woman.
One of the greatest defenses of the women’s reservation bill is that women would be less ruthless, softer and more prone to making smart diplomatic decisions as they are not weighed down by male insecurities. This is intellectual horse-manure. A woman in power has all the qualities that are hated in men. Golda Meir initiated Operation Wrath of God to avenge the deaths of Israeli athletes in ’72, our own Indira Gandhi ordered Operation Blue Star, Sirimavo Bandaranaike nationalized by force various foreign companies in Sri Lanka, and other examples like Margaret Thatcher and Hillary Clinton using every sneaky trick in the book to further their political ends. Frankly speaking, I have respect for all these women whether I agree with their politics or not, because they did what they had to do. Women in politics who are willing to do whatever it takes to win do not need a reservation. Even after the reservation, those are the women who’ll make it. This bill will change almost nothing.
Corruption in politics cannot be eliminated or even reduced by appointing the right people. There is no such thing. Absolute power corrupts absolutely. One must find a way to reduce the extremely high profit value attached to a government seat. The more the government dips its hands into anything, the more it’s venality. This concept is best explained by the example of Laloo Prasad Yadav and one of his great ideas that transformed Indian Railways into a profit-making organization. Earlier, goods wagons were allowed to carry only 81 tons, even though they were physically capable of carrying 90 tons. So people greased the palms of the overseers and took the maximum possible weight. Laloo increased the limit to 90 tons. (He famously said, “If you do not milk the cow enough, it will fall sick!”) Now the legal limit was the same as the physical limit, and the wagons carried the same weight, except now, the government got Rs. 7200 crore more. The idea he used was to remove the profitability attached to a wrongdoing, and it stoppped automatically. People’s moralities come and go, but their self-interest is permanent, and growing. So, let’s put our money on the surer bet.
Government corruption is mainly the result of an over-involved government. Ideally, the government should handle police, fire, army and certain big projects which have long lag periods after investment before the break-even stage. Everything else can be privatized. Competition ensures quality. Of course, should these private companies mess up, there should be no bailout to fall back on. It should be boom or bust. That will ensure that the market regulates itself.
While I believe that a good government like a good teacher should make itself progressively unnecessary, I understand if this bill might help some women in downtrodden villages speak up for themselves, though for the life of me, I don’t know how. So let the Lok Sabha also push it through, if they want to. Let’s make it easier for blowhard man-haters like Renuka Chowdhury to get a government seat! I guess if it benefits some truly underprivileged women, it is probably worth it.

9 thoughts on “The better ‘one-third’”